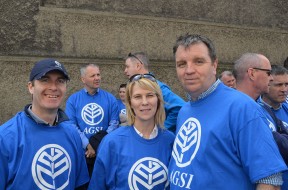 AGSI Blog
The National Executive of the AGSI has appointed Donal Smyth (pictured right), Deputy General Secretary. The post has been vacant since John Jacob took up the role of General Secretary a number of months ago. Donal has 34 years service in An Garda Síochána and has been the training Sergeant in the Meath Division since 2009. […]
Read more