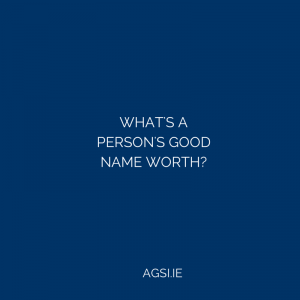 TD’s and Senators enjoy certain constitutional privileges. This means that  they have certain rights and privileges that are set down in the  constitution. TD’s and Senators may not for example, be arrested when going to, returning from or being within the precincts of either of the Houses of the Oireachtas.

This privilege does not apply to arrest for treason, felony or breach of the peace. TD’s and Senators may not be sued for defamation because of any speech in the House. This privilege protects members both in the House  and at Committee hearings. When these privileges were accommodated in the constitution, Ireland was a young nation. Historic events were still fresh in the minds of those drafting the constitution and undoubtedly these privileges were seen as necessary safeguards for politicians and the political process. However, we have matured as a nation.

The need for such privileges must be revisited. This privilege allows TD’s to make unfounded, unsubstantiated or malicious allegations against any member of the public without fear of having to defend the statement. Of course the Ceann Comhairle can ask the TD to withdraw a person’s name from the record but at that stage a person’s good name is tarnished.

As a mature nation it is time we ask; ‘should our constitution safeguard TD’s who make comments and remarks in the clear understanding that they cannot be held to account? Or should it afford individuals the right to defend their good name, reputation and standing in their community?’

One must assume the authors of the constitution enshrined privilege to safeguard the young nation but would never have envisaged a situation where these safeguards would be misused for political gain. I am prompted to raise this subject because of the actions of Deputy Mick Wallace on the 3rd October 2014. During a debate he named and made serious allegations against a member of our Association which were allowed by the Ceann Comhairle to remain in the public domain and in the record of the Dáil.

The role of the Ceann Comhairle is to ensure no Deputy steps outside that privilege. We also have the Committee on Procedure and Privileges which provides further oversight in this regard. On this occasion the Ceann Comhairle failed to insist that Mr. Wallace withdraw the person’s name at the time and to date his actions have not been investigated by the Committee on Procedures and Privileges.

This beggars the question ‘who is safeguarding the rights of ordinary citizens?’ The reality of today’s digital media world is that not only is the allegation alive on the record of the Dáil but it is imprinted on websites, social networking sites, discussion forms and online news media websites for now and forever.

The reach of the allegation by Deputy Wallace has gone beyond the walls of Leinster House and in fact has reached international media referring sites such as MuckRack.com. It also remains online on the Kildarestreet.ie website and the transcripts highlights the fact that the Ceann Comhairle did not ask for the members name to be retracted.

Is it time we took a closer look at the privilege of TD’s and Senators publicly naming individuals with immunity in the Dáil and/or Seanad and weighing it up against the possibilities of elected representatives using such privilege to pursue their own political agenda? Constitutional reform is being considered in a number of areas at present. Perhaps the privileges extended to TD’s and Senators in the constitution should now be examined as part of this reform agenda?