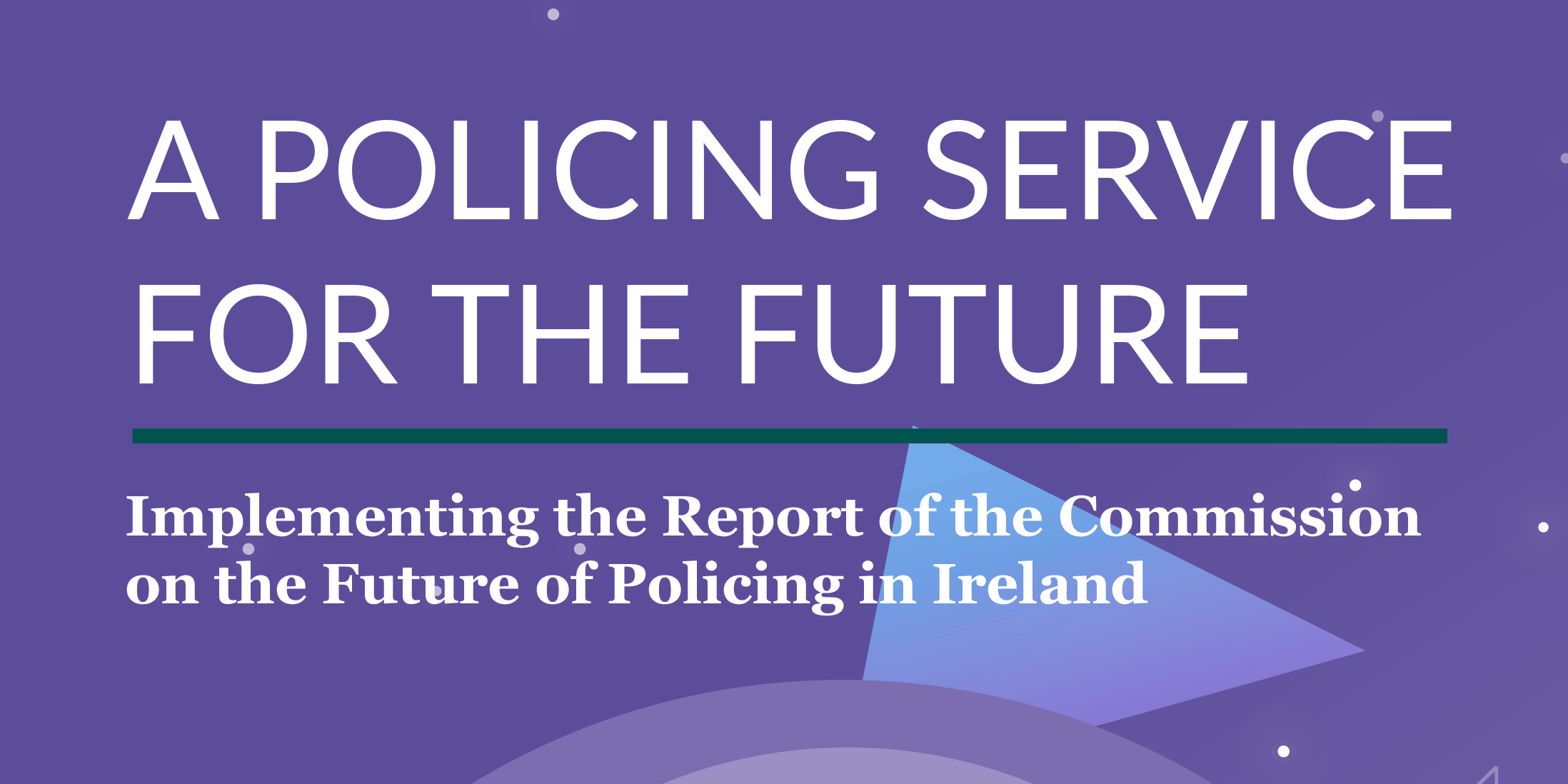 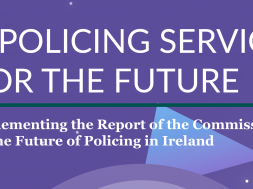 The Minister for Justice and Equality, Charlie Flanagan T.D., announced that at its meeting today the Government endorsed the report of the Commission on the Future of Policing in Ireland and agreed to his proposal to accept all 157 key recommendations (136 in full and 21 in principle).  The Minister also published a four year high level plan “Policing Service for the Future” which sets out the approach to implementation which will be overseen by a dedicated Programme Office in the Department of the Taoiseach as recommended in the Commission’s report.

Today’s approval by Government follows three months of detailed consideration by the Department of the report’s findings and recommendations and consultations with the Garda Commissioner, the policing oversight bodies, other Government Departments and agencies.

“This is an important day for the people of Ireland, and in particular for the men and women of An Garda Síochána.  Following an extensive root and branch analysis of policing in its totality by the Commission on the Future of Policing in Ireland, the Government has now endorsed the Commission’s clear vision for a modern, highly professional, human-rights-based police service.  The core focus is on a Garda organisation working closely and collaboratively with communities and other agencies to keep communities safe and to prevent harm to vulnerable people.

“I am convinced this is the right vision for Ireland to maintain and enhance public trust in policing, to address current challenges but also enable An Garda Síochána to meet future challenges.  Almost a century after its establishment, the organisation of An Garda Síochána must evolve, and do so in a coherent and strategic manner, to meet the issues confronting 21st Century policing –  this plan sets out the blueprint for change.

“I again acknowledge the contribution of the Commission under the expert leadership of Dr Kathleen O’Toole and the huge commitment and input of all the members in developing such a vision and roadmap for the future of one of the most important institutions of our State.  The breath of expertise from home and abroad on the Commission is manifest in its ambitious Report.”

The Minister outlined the work that has been taking place across Government in the three months since the Commission published its Report, saying:

“The actions identified will transform how policing services are delivered.  Most importantly, local front-line policing will be placed at the core of our police service, ensuring that Gardaí are more visible in communities.  It will also deliver a professional, modern and effective police service that is well-managed, efficient and cost effective, properly equipped and trained, with a strong ethical core and accountable to the people.”

“I am grateful to Ms Helen Ryan, who served as a member of the Commission, and has agreed to Chair the Implementation Group responsible for driving the Plan with the support of a dedicated Programme Office located in the Department of the Taoiseach.  Her experience as a Commission member and in the business world will be invaluable.”

The Department of Justice and Equality will immediately begin work on a new Policing and Community Safety Bill which will, as recommended by the Commission Report:

The plan (published today) runs to 2022 and the objective in 2019 will be to put in place the key building blocks to ensure that all priority actions are commenced.  Examples include building a human rights compliant mentality within the Garda organisation, a new learning and development strategy, and a review of the Garda discipline system.  The first action will involve transferring responsibility for managing industrial relations in the Garda organisation to empower the Commissioner to function as a true CEO.

The Plan for 2019 also includes a focus on improving the working conditions of Garda personnel through the deployment of ICT systems to reduce paper work and through addressing long-standing issues of concern including the rosters, the uniform and wellness supports.  The Plan will be a living document and will be updated twice a year as required.

The Minister also announced key decisions in relation to the State’s security structures:

“The Government has accepted the Commission’s assessment that some measures are needed to ensure a better multi-agency approach by the various bodies involved in protecting the State’s security in terms of drawing their intelligence capabilities together. It has approved the creation of the Strategic Threat Assessment Centre (STAC) as a national centre for intelligence collation and analysis to be headed by a National Security Co-ordinator within the Taoiseach’s Department.”

“The new Policing and Community Safety Bill will redefine policing to explicitly include the prevention of harm to vulnerable people and to provide for a new coherent governance and oversight framework to reflect the Garda Commissioner’s role as CEO.  The Bill will ensure strong internal governance through the establishment of a non-executive Garda Síochána Board in line with best practice, and ensure robust, transparent external oversight and effective accountability and ultimately more effective policing.”

Commenting on the proposed new governance and oversight framework for policing the Minister said:

“I am conscious of some concern that the proposals risk diluting the current level of external scrutiny.  Following detailed consideration of the concerns, taking account the views of the oversight bodies themselves, I am satisfied that the proposals are a coherent response to a system of external oversight that is complex and confused and acts to the detriment of accountability on the part of individuals and the organisation itself.  Taken as a whole, the suite of proposals will ensure the complementary objectives of strong internal governance in line with best practice and effective external oversight of policing are achieved.

“I am also satisfied that it is appropriate that the Garda Commissioner and the Garda Síochána Board be given responsibility for senior appointments, subject to normal public service recruitment and promotion standards being applied.  I accept the Commission’s strong view that the Commissioner must be empowered to act as the CEO of An Garda Síochána and the making of appointments is clearly within the remit of the Board and CEO of any large organisation.

“I am conscious of the experience and expertise of those who serve on the existing oversight bodies and my Department will be consulting with them as we develop the new legislation.

“It is anticipated that the new framework will be in place on 1 January 2021.  In the intervening period the existing oversight bodies will continue their important work in accordance with their statutory remit.”

In relation to the implementation structures that have been put in place the Minister said:

“The Government has fully endorsed policing as extending beyond An Garda Síochána and as a responsibility of the whole of Government.  It is appropriate, therefore, that the implementation structures are placed at the centre of Government in the Department of the Taoiseach with representatives of An Garda Síochána and relevant Departments sitting on the Implementation Group.  The close involvement of key Departments is important in the context of ensuring the right arrangements are in place so that Gardaí can focus on policing duties.

“Furthermore, the Department of Public Expenditure and Reform has a key role in the implementation process to ensure that proposals are appropriately costed and achievable within the timeframe we have set.

“My Department along with the Garda Commissioner will, of course, be centrally involved in the Implementation work.”

The Government has also approved in principle the establishment of an Independent Examiner of terrorist and serious crime legislation, subject to an examination of the functions of such a role and the detail of the statutory powers that would be required for the role.

Scoping work will now commence on other legislation required including to provide for body worn cameras; and to codify search, arrest and detention powers.

The Minister confirmed that the expansion of the Garda workforce will continue in 2019 and welcomed the Commissioner’s plans to recruit 600 new Gardaí and a net 600 Garda staff which would facilitate the redeployment of 500 experienced Gardaí to front-line policing duties next year.  This level of recruitment will ensure that the Government’s overall target of 15,000 Gardaí and 4,000 Garda Staff in 2021 will be achieved.

“In presenting this plan for the future I am deeply conscious of the words of Mr Justice Charleton in his recent report and of the need for change – for the sake of the many people in An Garda Síochána who daily display “extraordinary devotion to duty and intelligence at the highest level”.  For their sake and for the sake of the public we all serve, these changes need to be happen and the Commissioner must be supported in implementing the reforms we all agree are necessary.

“My Government colleagues and I are determined, as I know the Commissioner is, to ensure that this plan is delivered by the centenary of the establishment of An Garda Síochána in 2022.  I look forward to a modern, well-resourced Garda Síochána strongly placed to face into its second century with confidence.”