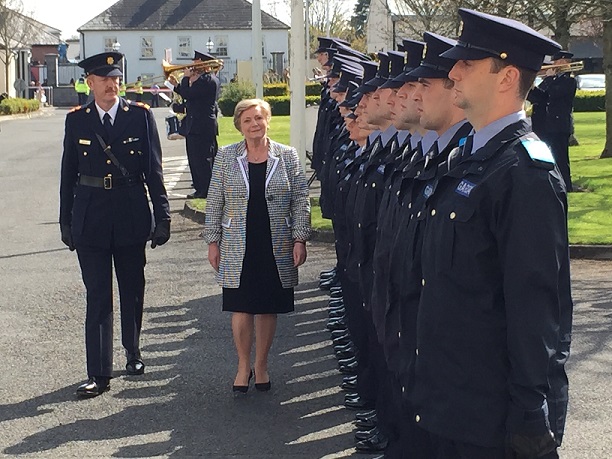 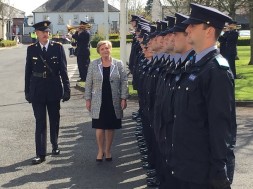 7 March 2016
Commissioner, distinguished guests, ladies and gentlemen and of course our new members of An Garda Síochána.

It is a great honour to be standing here today to welcome you, and to congratulate you on realising your ambition, of becoming a proud member of An Garda Síochána.

It is a day to applaud your achievement in successfully completing 32 weeks of challenging and rigorous training in which you demonstrated that you have accomplished the skills required to deliver a 21st century policing service to the people of Ireland.

It is a proud day for your family and friends who have supported you on your journey and who are here today to witness your success and to celebrate this significant milestone in your career as a member of An Garda Síochána.

It is equally a proud day for this country to have 99 men and women answering the call to public service to support the mission of An Garda Síochána in working with communities to protect and serve.

You are starting your career in An Garda Síochána at time of significant reform across the justice sector. My focus and that of the Government has been on concrete measures to ensure, and enhance, public confidence in policing in the State while supporting An Garda Síochána in keeping our communities and country safe.

This requires firstly overseeing reform of the administration, accountability and oversight of policing in Ireland; and secondly delivering on a programme of reform, modernisation and investment in An Garda Síochana

A very important milestone in this reform agenda was achieved with the establishment of the Policing Authority on 1 January. The Authority will provide a new, effective and independent forum for the public oversight of policing services in Ireland. Having worked closely with the Garda Commissioner and the Chairperson over the last year, I’ve seen a real unity of purpose to promote continuous improvement in policing and a determination to work together to achieve that.

We must have that continuous improvement, because crime constantly moves, morphs, develops.

In response to the recent gang murders, we immediately strengthened the resources available to An Garda Síochána. I provided a ring-fenced additional allocation of €5 million. We’re now well on the way to establishing a dedicated Armed Support Unit in Dublin. Of course, while the Government can provide the resources to confront this grave threat to public safety, it is the dedication, professionalism and bravery of members of An Garda Síochána that really counts. You join the ranks of an organisation with a proud tradition of upholding public safety, irrespective of the personal dangers involved. For that especially, An Garda Síochána continues to have the respect and esteem of all law abiding people.

Burglary is a heinous crime and we have made particular efforts to deal with the often traumatic impact on householders and local communities. We have provided additional resources to launch Operation Thor which has been place now for about 4 months. In that short time Gardai have made significant progress in and have implemented 12,500 anti-crime patrols and over 15, 000 targeted checkpoints nationwide, leading to in the region of 900 arrests. While the available data on is still provisional, the indications are that Operation Thor has led to a reduction in burglaries of in the order of one third. I hope to see this trend confirmed in the coming months and I want to pay tribute to all of the members of An Garda Síochána who are making such a concerted effort to combat criminals and protect our communities.

Operation Thor is supported by additional resources, backed up by the new legislation I introduced to deal with persistent burglary offenders. The Criminal Justice (Burglary of Dwellings) Act 2015 is targeted at those repeat burglars who have previous convictions and who are charged with multiple offences of residential burglary. It provides for consecutive jail sentences for multiple offences and it also allows Courts to refuse bail for offenders who have a previous conviction for domestic burglary, coupled with two or more pending charges.

But that’s just one example. We have resourced mobile, visible and responsive policing. The 2016 Budget allocation of €1.5 billion for An Garda Síochána allows the recruitment of a further 600 new Gardaí this year bringing to 1150 the number of Gardaí recruited since this Government reopened the Garda College in September 2014.

Last November saw the establishment of a new state-of-the-art DNA Database System under the management of Forensic Science Ireland. The intelligence generated by the database in terms of linking crime scenes and identifying suspects will greatly help crime investigation.

You are, above all, community police officers and we know you will maintain and build upon the respect and trust An Garda Síochána enjoys within communities. Your training will stand to you – but so will the knowledge that in your role as a member of An Garda Síochána you can make a real difference in the lives of our citizens, by making our communities safer and better places to live.

You must uphold the organisation’s values of honesty, trust, accountability and respect. You have the ability to contribute to and shape the future for the organisation. I believe that every one of you has a particular insight to offer regarding the future development of An Garda Síochána, which will support the organisation to deliver a modern, professional police service that the people of Ireland can be proud of. I hope that each and every one of you contribute in your own unique way to helping An Garda Síochána evolve and grow in a way that can bring great pride to you as individuals, to the organisation and to the country that you have vowed to serve.

I know you will enjoy a rewarding career within An Garda Síochána and that each of you leaves here with great enthusiasm, hopes and ambitions for the future. I ask that you use this energy to deliver a policing service we can all be proud of.

I wish you the best of luck and wisdom in your career and I hope you all have a great day with your family and friends.
ENDS

tags: Templemore
previous Dáil Debate: To discuss the ability of GSOC & the Gardaí to access the phone records of citizens including journalists.
next Garda Commissioner Insists Criminal Gangs 'Top Priority' For Gardaí