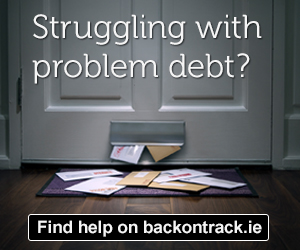 Most people have debt but when repayments suddenly become unmanageable it becomes problem debt and this can happen due to a variety of reasons, usually an unexpected change of circumstances such as pay cuts, job loss or relationship breakdown. Many people in Ireland are having trouble making ends meet and are finding themselves in a position where they are juggling bills to keep creditors at bay.

The sudden collapse of the economy in 2007 came as a shock to many. Pay cuts and job losses have meant that people who were doing well and who were financially independent quickly found themselves making personal cutbacks and struggling to keep up with their outgoings. The fall-out of the economic collapse has lead to financial uncertainty and stress for many.

Despite the feeling of isolation that often accompanies debt, it a problem that is affecting hundreds of thousands of people in Ireland today. Almost 130,000 mortgage account holders are in arrears with repayments. Families are overburdened with debt. People without mortgages are also finding themselves with maxed out credit cards; overdrafts that they cannot get out of and personal loans they simply cannot repay.

It can be difficult to discuss financial issues with friends and family due to pride, or even fear that they will not understand or will not be in a position to offer help.   As a society we need to realise that debt problems are nothing to be ashamed of and try to regain some control of the situation.

Facing up to problem

Acceptance of the situation is the first step in finding a solution. It is vital for every person with problem debt to seek a tailored solution for their particular situation. It can be tempting to ignore the issue and hope the problem will go away but if that happens the situation will continue to spiral out of control.

Although they may not realise it, many people in financial difficulty in Ireland are insolvent. Some of the indicators of personal insolvency are:

–       A reluctance to set up direct debits to pay bills in case money cannot stretch to meet them.

–       Receiving phonecalls and letters from creditors about missed payments and threats of repossession.

It is common for people not to recognise that they are insolvent; they are too busy coping with the problem and trying to make ends meet.

The Insolvency Service of Ireland (ISI) is an independent government body set up under legislation to help people with personal debt problems. The ISI has 3 debt solutions that are alternatives to bankruptcy. The ISI has established a network of qualified professional advisors around the country who are there to help sort out personal debt problems. Personal Insolvency Practitioners (known as ‘PIPs’) have passed exams on personal debt and are regulated by the ISI. Many PIPs are accountants, solicitors or qualified financial advisors.

The following is an overview of the role of a PIP:

–       Calculate the amount the person could contribute towards their debts after reasonable living expenses[1] (allowing for food, health, education, savings, etc. The fee the PIP charges will be built into this amount.

–       Develop a tailored proposal to put to the person’s creditors to sort out their debts for agreement.

–       Proposals differ for each case, and their duration can vary from a few months to up 5 or 6 years. At the end of that time, finances will be back on track, giving the person a fresh start.

People are generally surprised by the fact that the amount allowed under the ISI’s Reasonable Living expenses is often higher than the amount they were trying to live on before seeking an insolvency solution which enables them to have a better standard of living and allows them to participate in the community, as others do.

As long the person keeps to the terms of the arrangement, creditors cannot make contact with them about their debts, and at the end of the agreed term any money still owed on unsecured debt is completely written off. If the person has secured debt, like a mortgage, the PIP will make sure that the repayments are affordable. This could mean that some of the balance will be parked – as with a split mortgage – or even written off so as to reduce mortgage payments to an affordable level.

People often ask why would creditors settle for less than they are owed but it is becoming clear that it is also in the creditors’ interest to sort out any backlog of debt. Of the hundreds of cases that have already gone through the ISI’s system, 3 out of 4 proposals are being agreed to and accepted by creditors. The role of the PIP is to find a sensible solution that balances the interests of everyone.

Unlike other informal debt solutions that are on the market, the ISI’s solutions are legally binding, cannot change unexpectedly and offer protection from creditors who will no longer be able to contact a person once they are in an arrangement – no more unwanted phonecalls, letters or visits. The outcome is that the person will have some debt written off and any remaining debt will be manageable.

Some people have expressed concern to the ISI about whether availing of an insolvency solution could impact on their credit rating and limit their options to get credit in the future. However, when a person is in arrears on payments this could already be known to credit rating reference agencies. Entering into an agreement should indicate to potential lenders that the person is proactively addressing their financial situation and on completion of the arrangement they will be solvent and therefore potentially more eligible to obtain credit. Ultimately, the decision on whether or not to give credit is a decision for the lender.

For many people, there is great relief at having entered the process and begun the journey out of debt. The phonecalls from creditors stop, the demand letters no longer drop through the letterbox. The debts that kept them awake with worry are taken out of their hands and a second chance of a debt-free future opens up ahead giving them a fresh start.

They have enough money to contribute some money towards their debts and they can afford a reasonable standard of living, and this means having some money for activities to ensure both they and their children are able to play sports or go to the cinema or do the normal things people do.

Real debt solutions are now available. Where previously, there may have been a stigma attached to members of the Force getting into financial difficulty, AGSI members should take comfort in a recent statement by the Minister for Justice that:

If you are struggling with debt, you are not alone. Take the first step to take back control of your finances and get the fresh start you deserve. Make an appointment with one of the growing network of PIPs throughout the country. Contact details for PIPs and further information on the debt solutions are available at www.backontrack.ie or by calling the ISI’s Information Line on (076) 106 4200.

[1]This amount varies depending on the person’s circumstances.   Details are set out in the ISI’s Guidelines to Reasonable Living Expenses – see www.isi.gov.ie