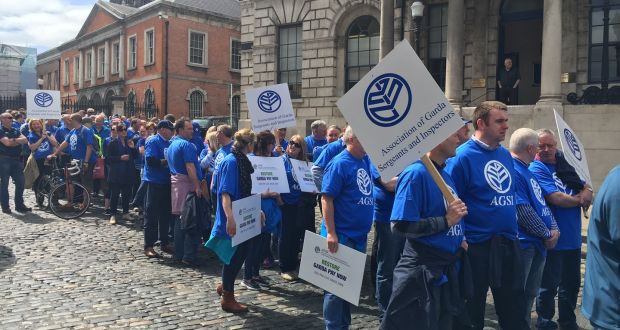 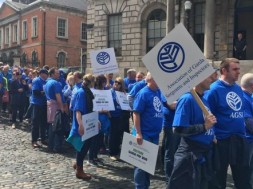 This article was originally published on IrishTimes.com.

Several hundred senior gardaí have begun marching towards Leinster House in a protest to seek restoration of their pay to 2008 levels.

Members of the Association of Garda Sergeants and Inspectors, dressed not in uniform but wearing blue t-shirts, are marching from Dublin Castle to highlight what they say is a lack of engagement by the government to deal with their pay issue.

AGSI president Antoinette Cunningham says the government needs to sit up and take notice of the concerns of gardaí about pay restoration.

“It is regrettable that we have to do this but we have no choice. It is the government’s responsibility that we are on the streets today, they have taken no action whatsoever to try to prevent this march by the AGSI. The series of protests over the next few weeks will hopefully make the government sit up and take notice.”

Speaking on Newstalk Breakfast, Ms Cunningham said the aim of the march is to highlight the cause for pay restoration within An Garda Síochána.

“We want to tell the public that we were promised a review of our pay, three years ago. To date there has been no meaningful discussion. Our members are frustrated and angry.

“After three years of false promises they can’t take any more and are protesting in relation to that.

“It’s all fine for Paschal Donohoe to say that Lansdowne Road is the only gig in town, but the government has to go back and fulfil the obligations they made to an Garda Síochána under the Haddington Road review, the piece of which the guards finished giving the 30 extra hours, the new roster, new crime management systems, new property management system.

“For that the government was to give us a review of the pay. We kept our side of the bargain for three years, they didn’t keep their side. There’s no point in moving on to a Lansdowne Road agreement when Haddington Road is not finished for us yet.

“It is totally unacceptable that we are one of the only organisations in this country that don’t have a say in our own pay. No other group would put up with that.”