Published in the Irish Times and written by John O’ Brien, a former Chief Superintendent 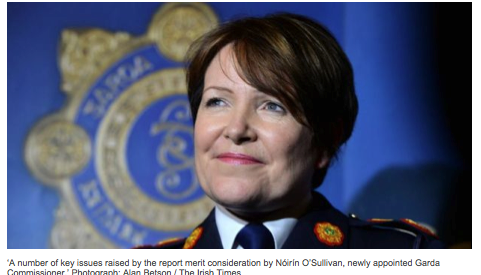 Newly appointed Garda Commissioner Nóirín O’Sullivan has said the recent report by the Garda Inspectorate would aid a reform programme she had already begun. There are a number of key issues raised by the report that merit her consideration, 10 of which are highlighted below.

Recently we marked world remembrance day for victims of road traffic collisions. Twenty four thousand people have died on our roads since 1959. The inspectorate does not seem to consider this aspect of the Garda role as important. Second, the provision of a policing service is a complicated business, with many constituent elements.

Effectively it needs the maintenance of small numerical units effectively managed and led. Paradoxically the incessant recitation of shortcomings and difficulties is damaging the morale of members of the Garda and is confidence-sapping for the general public.

Third, this report came in the wake of the inspectorate’s own report on the penalty-point controversy, reports by Judge Guerin, Judge Cooke, and soon Judge Fennelly, and a damning report on the Department of Justice. The exit of minister Alan Shatter, commissioner Martin Callinan, confidential recipient Oliver Connolly and the voluntary side-step by secretary general Brian Purcell.

Also one has to consider the adverse reports by three Dáil committees. Interim reports The inspectorate report was three years in drafting. It did not publish interim reports. I believe the inspectorate has tried very hard to produce a volume of work of value to the Garda, the Government and the community, but it is inexplicable that interim reports were not issued.

Effectively the inspectorate tells us the criminal justice edifice is crumbling but for some extraordinary reason this shocking news was delayed and released in one massive tranche.

Given that since 2006 the commissioner’s policing plans have been vetted by the minister of justice, it is important that the public is advised why the people in place did not produce this “Road to Damascus” revelation of their own volition. Fourth, a possible explanation for the detailed failures listed in the report is that there has been a dearth of modern technology systems.

There has been a significant reduction in Garda numbers. The introduction of a new rostering system was supposedly designed to deliver maximum numbers at the time of greatest need. This roster appears to be problematic. The suspension of recruiting and the cutbacks in training for five years have been detrimental. Fifth, the inspectorate makes sense when it points to the lack of first-line supervision.

The absence of formal briefing times and the lack of support for junior officers is a serious matter. Sixth, this current situation amounts to a crisis. A time of crisis needs strong, competent, professional leadership. It needs planning and it needs resourcing.

Unfortunately senior gardaí have failed to engage in public discourse in a thoughtful, professional way. The recurring mantra is one which studiously avoids disagreeing with the official government line on resources or policies. One understands the difficulties inherent in the current structure and it is just possible that the change to the new Garda authority may provide a departure from the traditional line. NYPD example

Seventh, an interesting example of change is the experience of the NYPD under the leadership of commissioner Bill Bratton.

This was a paradigm shift in the policing approach. He enjoyed strong political support and he created an evolution of policing service in New York that was without precedent. This occurred in the 1990s when there was relentless attention to “smaller” incidents which produced major results from the overall crime perspective. This policy was resource-intensive with a significant budget increase and an increase in policing numbers.

It also increased police accountability. This experience shows change is possible, even if it comes at a financial cost and is very demanding of political leaders and police leaders. Eighth, serious study was conducted as part of the process of the Pulse system’s introduction in the 1990s. The tender documents for a major investigation management system have been on hold for several years.

Two important strategic interactions were strongly recommended for inclusion in the Pulse system – the investigation management system and “data entry once system” (whereby gardaí can enter data directly from their squad cars) – but they were not actioned. This decision was responsible for many of the shortcomings identified in the inspectorate’s report.

Ninth, the evolution of leadership style is problematic and it is not just a matter for the Garda. Clearly the issues within the Department of Justice are significant. It has failed to fill the secretary general post and it has been advertised again. This is an unprecedented development. Finally, the inspectorate is rightly critical of poor technology and poor management practices. Self-evidently this analysis should be matched by robust costed recommendations. It has made a key recommendation that falls far short of this criteria.

It is recommended that the Department of Justice establish and task a criminal justice service group, comprised of the agencies and stakeholders responsible for community safety in Ireland, with overseeing the implementation of all of the recommendations accepted from this report. This is a placebo recommendation, which requires months and years of after- actions with little prospect of success.

The answer lies in executive action formulated along business case lines. Clearly much work lies ahead for the new commissioner – and one wishes her well in the severe tests ahead. John O’Brien is a former Garda chief superintendent who is now a police and security analyst