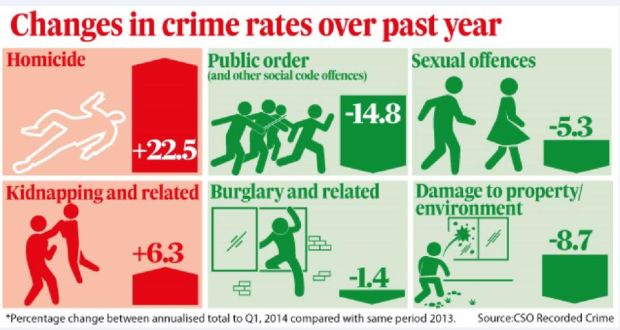 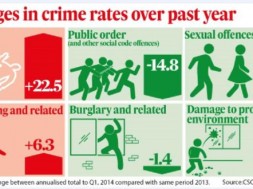 Following the publication today of the of the CSO recorded crime statistics for the fourth quarter of 2015, the Minister for Justice and Equality Frances Fitzgerald TD paid tribute to An Garda Síochána’s determined and robust response to crime which is being supported by the very important
investments which the Government has made in policing resources.

The Minister particularly welcomed the reduction in burglary crimes, “The CSO figures validate the early operational feedback which I received from the Garda Commissioner about the very positive impact of the concentrated efforts of An Garda Síochána to tackle burglary and property crime under Operation Thor”.

While the CSO figures show an overall reduction in burglary of 5% for the twelve month period ending on 31 December 2015, there has been a very significant reduction during the last quarter of the year. In fact, the figures for the last quarter of 2015 indicate a reduction of 26.2% compared to the same period in 2014. Furthermore, the CSO figures refer to the period October to December 2015 and Operation Thor commenced on 1 November 2015.

Supported by a special initial allocation of €5million, Operation Thor has seen concentrated Garda activity with widespread anti-crime patrols and targeted checkpoints leading to over 1,000 burglary-related arrests. These have included the arrest of particular target suspects for burglary crime, and arrests connected to crimes committed by mobile criminal groups.

The Minister commented that “the very welcome reduction in burglary is most encouraging and I believe it vindicates the carefully considered strategy to tackle the scourge of burglary crime by enhancing Garda capacity and improving our legislation.”

In addition to the recruitment of 1,150 new Gardaí and very significant investments in additional policing resources, the Minister guided the passage of new legislation contained in the Criminal Justice (Burglary of Dwellings) Act 2015, which is targeting repeat burglary offenders. The Minister stated, “I have made it a particular priority of my work as Minister for Justice and Equality to deal more effectively with criminals who prey on ordinary householders, and I am pleased that the new legislation is available to support prosecutions arising from the concerted Garda drive against crime under Operation Thor”

The legislation requires the District Court to provide for consecutive sentences for multiple offences. It will also allow Courts to refuse bail for offenders who have a previous conviction for domestic burglary coupled with two or more pending charges.

However, the Minister did voice concern about some other crime trends detailed in the new CSO release. In relation to the recorded increase of 15% in Sexual Offences, she commented “As Minister, I introduced the Criminal Law (Sexual Offences) Bill 2015 with a view to providing a more effective response to sexual offending within our criminal justice system. Another important development is the entering into force of the EU Victims Directive from 16 November 2015”

The CSO figures also show increases in some high volume crimes such as Assaults and related offences which are up by 11.8%.

In conclusion the Minister said“While I welcome the reductions in burglaries and other serious crime categories, the latest crime figures show that we need to maintain investment in Garda resources as well as continuing with the recruitment of new Gardaí. With the continuing support of communities throughout the country I am confident that An Garda Síochána will continue to confront criminals and provide protection and reassurance for all law abiding people.”