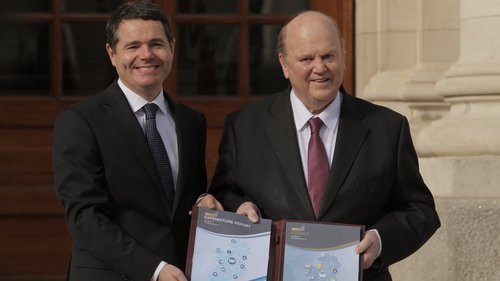 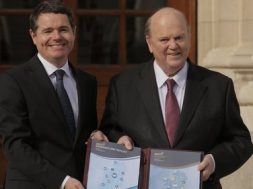 The Tánaiste, Frances Fitzgerald, TD, has welcomed funding in Budget 2017 for the Justice and Equality sector totalling €2.54 billion, an increase of €85 million over the Revised Estimate in 2016 (€68 million increase in current expenditure compared with the Mid Year Expenditure Report 2016).

Funding has been provided for the recruitment in 2017 of 800 Garda recruits and up to 500 civilians to support the wide ranging reform plan in train in An Garda Síochána.  A total of €71.5 million has been provided for Garda overtime to allow for sustained pressure to tackle gangland crime, fund the continuation of Operation Thor and ensure that measures to prevent international terrorism are unrelenting throughout 2017.

The Tánaiste said: “This Government restarted Garda recruitment in 2014 after a time lag of 5 years.  I can now announce that the Government has approved my proposal that by 2021 the Garda workforce should comprise a total of 21,000 personnel; to include 15,000 Garda members, 2,000 Garda Reserve members and 4,000 civilians.  The funding will allow for recruitment of 800 Gardaí and up to 500 civilians in 2017.  Appointments will also be made to the Garda Reserve of approximately 300 in 2017.   Securing this funding will support and strengthen the reform process underway in An Garda Síochána.

I also welcome the funds totalling €71.5 million in 2017 for Garda overtime which will facilitate the continuation of large scale operations targeting gangland crime, burglary and terrorism.  This is resource intensive, difficult and dangerous policing work but the investment to date in An Garda Síochána has yielded results and this funding will ensure these significant efforts can continue next year.  I have also secured €1 million for a new round of community CCTV schemes in line with the Programme for a Partnership Government commitment to provide investment in CCTV systems along the road network and in urban centres.”

New Forensic Science Laboratory – €6 million in 2017
The Tánaiste announced she has accelerated the building of a new Forensic Science Laboratory. The current facility based in Garda HQ is outdated and in need of complete modernisation.  OPW is in a position to develop the much needed new laboratory on a site in Backweston in Co. Kildare.  This funding will now allow for it to commence in 2017.

The Tánaiste said: “I am acutely aware of the very significant expert contribution played by Forensic Science Ireland in the criminal justice system. Given the importance of the fight against crime, the new custom-built facilities, when completed, will allow for greater efficiencies and a much improved service in analysing samples submitted from crime scenes and providing expert evidence in criminal trials”.

Welcoming the funding, the Director of Forensic Science Ireland, Dr. Sheila Willis said: “This is very good news for the management and staff of FSI.  The current facility is unsuitable for modern science practices and it is vital that a new laboratory starts as soon as possible.  This will allow us to make full use of the huge potential offered by the new DNA database and future-proof the needs of the Service for decades to come.”

Courts Service Vote
The Tánaiste announced over €30 million in additional funding for the Courts, bringing the total gross allocation to €140 million in 2017.

Additional capital funding of approximately €23 million is provided for, plus €4.5 million for ICT in respect of the new courthouses and to upgrade and enhance ICT functionality in the courts.

The additional funding will also boost staffing across the Courts Service, including in probate, wards of court and change management as well as provincial court offices, alleviating delays in frontline services and driving reform.

Regulatory and Immigration Functions Strengthened
There are a number of key areas where significant additional staffing requirements are being funded. These requirements have arisen due to expansion of services, increased regulatory requirements or in areas such as INIS (Irish Naturalisation and Immigration Service) to address increased volume of applications and to facilitate much needed reform such as in relation to further civilianisation of passport control at Dublin Airport.  A total of €3.6 million additional funding is allocated to INIS for this purpose and recruitment for these positions will start as soon as possible.

Office of the Data Protection Commissioner
Following on from significant additional funding provided this year, a further amount of €2.8 million is being provided in 2017 which brings the total allocation to over €7.5 million.

The Tánaiste said: “This Budget 2017 increase follows significant funding boosts in 2015 and 2016 and underpins the important role the Data Protection Commissioner plays in regulating a high volume of data-rich internet multi-national organisations with European operations in Ireland. It will also enable the Office to accelerate preparations for the introduction of new EU Data Protection Regulation in 2018 which will give effect to a fundamental transformation of the data protection landscape as it currently exists.”

Irish Prison Service
The allocation in 2017 for the IPS will provide for the commencement of the construction of a new 110 cell wing and a female prison unit in Limerick Prison, as well as a new maximum security block in Portlaoise prison.

Charities Regulatory Authority
An additional €1.7 million is provided for additional staffing and other costs to enable the Authority to strengthen its vital oversight roles and responsibilities under the Charities Act.

Probation Service
The Service plays a key role in reducing recidivism and an additional amount of over €2 million has been made available including €1 million in extra payroll funding which will allow the Service to recruit further new Probation Officers and Community Service Officers.

The Tánaiste is particularly pleased that additional funding is being made available to the Legal Aid Board in 2017. In total there is an increase of over €4 million (12%) in 2017 which will improve provision of legal advice to vulnerable families and includes €2.4 million for legal advice and representation to people who are insolvent and in mortgage arrears. This support forms part of the response to mortgage arrears in the Government’s Housing Action Plan.

While additional resources are being provided across a number of programme areas, the Tánaiste has secured additional funding for:

–        Traveller Initiatives – €1.0 million: further investment is required in this area in tandem with a new forthcoming strategy. The funding will be used to enhance services to traveller community groups and further develop counselling and mediation services.
–        Social Disadvantage Measures- €2.7 million:  Dormant Accounts Funding including Garda Youth Diversion and other Irish Youth Justice Community Programmes.
–        Crime Prevention Measures/COSC and Victims of Crime – €0.6 million: Funding will facilitate awareness raising campaign on domestic and sexual violence and provide for domestic violence perpetrator programmes to fulfil requirements under the Council of Europe Convention on preventing and combating violence against women and domestic violence, which is a Programme for Government commitment.

The Tánaiste also welcomed the additional funding provided for the Victims of Crime Office. She said “This increase will assist community and voluntary organisations in meeting the additional demands for support services, such as the provision of information on the rights of victims and court accompaniment, arising from the implementation of the provisions of the EU Victims Directive”.

Irish Human Rights and Equality Commission
An additional €300,000 is being provided in 2017 for additional recruitment to enable the Commission continue its vital work.

Valuation Office Vote
€750,000 has been allocated to the Valuation Office to support the revision of valuations for certain commercial properties in Local Authority areas.  The appointment of over 20 additional staff and the establishment of a Revision Unit will increase capacity in this important area.

Expenditure in the Justice Vote Group totals €2.54 billion and covers the following Votes: