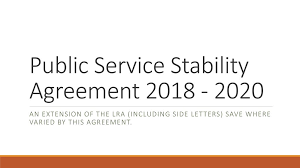 “No inclusion of Garda Staff Associations”

The Association of Garda Sergeants and Inspectors (AGSI) has expressed deep concern following media reports about apparent exploratory talks to a successor to the Public Service Stability Agreement 2018-2020.

AGSI says, “it appears that pay talks are happening but without the involvement of all stakeholders.”

General Secretary, Antoinette Cunningham confirmed that AGSI had made inquiries this week to Garda Headquarters in relation to a successor to the PSSA but were told, “there is no meeting for Staff Associations imminent.”

“We are disappointed and deeply concerned that having been guaranteed that AGSI would be part of national negotiations in relation to pay and conditions that directly affect our members, that exploratory talks are now happening without our involvement.

“Our National Executive will meet next week to consider if the parameters of a successor to the PSSA talks might already be pre-determined, and if this is the case, what role if any, do we actually have in national pay talks?”
tags: Featured
previous “COVID-19 Fine System Requires Clarification"
next AGSI call on decision-makers to re-visit priority list of vaccinations for members of An Garda Siochana