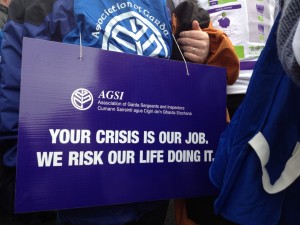 Members of the Association of Garda Sergeants and Inspectors are today ‘removing goodwill’, as they implement the next step in their campaign to oppose further pay cuts emanting from the Croke Park extension talks.

The joint campaign with colleagues from the Garda Representative Association was agreed at a joint meeting this week between both National Executives.

The move involves members removing goodwill and refusing to use their personal mobile phones, laptops and vehicles on the job. It also involves withdrawing consent to be available for non-public duty.

Vice-President of AGSI Padraic Dolan says opposition to proposed pay cuts is growing among his members.

“We agreed a plan in conjunction with our GRA colleagues and this will be fully implemented over the coming days. We are also planning further action with our colleagues in the 24/7 Frontline Services Alliance.”