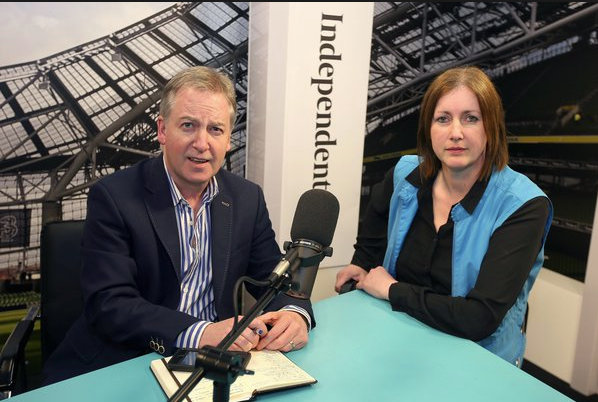 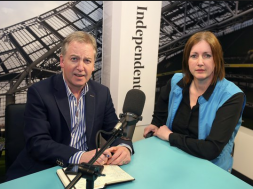 Are the Gardai prepared to go to prison over pay restoration? ‘We will do whatever we have to do,’ says AGSI President on Paul Williams podcast.

Is there a summer of discontent brewing between the government and An Garda Siochana?  If their calls for talks about pay restoration aren’t heeded that’s what being threatened, according to Antoinette Cunningham, President of the AGSI.

Antoinette Cunningham has made history by becoming the first female president of the Association of Garda Sergeants and Inspectors – and she is very clear about the task ahead
The first-ever female president of a garda union says gender does not play a role in achieving success in the force.

Antoinette Cunningham is set to lead the Association of Garda Sergeants and Inspectors (AGSI) for the next five years.
In an exclusive interview, Ms Cunningham said her appointment was a “proud achievement” for her.

“It’s something that I treasure and I hope that I can successfully bring something to the role and I look forward to the challenge of the next three years,” she said.
While she acknowledged that An Garda Siochana can be something of a man’s world, she said she didn’t believe that her gender played a role in her appointment.

“I’m not so sure you would be in the position just because of your gender,” she said.
“It’s more to do with competence and the trust that people place in you rather than a gender-related issue,” she added.

A native of Limerick, Ms Cunningham said that she had aspired to join the gardai since she was around eight or nine years old.
“I always wanted to be a guard, from a very young age,” she said. “I just identified this as the job for me.

“Then when I found out a little more about it and the whole sense of working in communities, it really appealed to me.”
Ms Cunningham was first stationed in Killarney, where she described her role in the small tourist town as more “friendly policing”.

However, she was soon moved to Limerick as the city found itself in the throes of gangland warfare.
“I went to Roxboro Road at a time when gangland crime in Limerick had started to come to the fore and it was a very difficult place to work,” she recalled.

Despite the challenges she and her team faced there, she had fond memories of her time in the station.
“The funny thing about the guards is often the more difficult the place is to work, the more united the guards and the people are in there,” she said. “You all have a common purpose.”

She is now in her 25th year of service and lives in Limerick with her 16-year-old son.

Ms Cunningham takes the lead at the AGSI as the force faces several problems in relation to resources, and disillusionment in the ranks.
Describing her work as an instructor at the Garda College in Templemore, she said the demographic of new recruits had changed massively in recent years – bringing a whole new set of challenges for young gardai.

“The profile of somebody starting in the guards is not a 19-year-old, fresh-faced man or woman from school,” she said.

“The average age is a 26-year-old, married with a young family and a mortgage – and a mortgage that is from a Celtic tiger era, which is a huge repayment every month,” she added.
But she was quick to add: “It’s still a career that people have a passion for and I admire that.

“Because I work in the Garda College, I see first hand the enthusiasm with which these people come into the guards,” she said.

“They really do come in with such a high level of enthusiasm. They are undergoing a fantastic training programme now as student guards,” she added.
Ms Cunningham also referred to the issue of garda resources, and how harsh cuts in recent years had adversely affected the public’s experience of gardai.

“When somebody picks up their phone and they ring a garda station, they expect a response,” she continued. “They don’t expect a response in three or four hours time. When they get that level of response, there is a feeling of disappointment that response wasn’t quicker or faster,” she added.

She also pointed out that people may not realise there may be a several calls waiting to be answered when they ring their local station.
“There could be 14 calls ahead of your call and you just may not have a significant amount of people, or sufficient people, to give the response that [gardai] would like to give,” she added.

Ms Cunningham said she recognised that recruitment was continuing for gardai, as announced recently by justice minister Frances Fitzgerald. However, she claimed that the current rate of 600 new gardai per year would mean the process of restoring could take “years”.

“Align that with around 300 retirements and you can see how long it could take to potentially build it up,” she said. At this pace, I think it could take years,” she added.

Ms Cunningham also called for a “deployment model” for gardai, which would indicate how many employees would be needed in An Garda Siochana.

“Can anybody go and tell us at this present time how many guards are needed to police Ireland? Nobody can, and we’ve asked that question on a number of occasions,” she said.

She also highlighted the issue of garda pay, and stressed that members of the force were “not looking for a pay increase”.

“We are looking to talk about restoring our pay,” she said. “That’s all we want, and [we] can’t get there.”

She also criticised the fact that there is no member of the gardai involved in negotiations on pay.
“Would that be acceptable to any other group or organisation in this country? I don’t believe it would,” she said.

Ms Cunningham also pointed out that gardai had been promised a review of their salaries by Government three years ago.

However, she said there had been “no meaningful discussion on that.”

AGSI, along with the Garda Representative Association (GRA), have to go back to their members and “say there’s no prospect of getting back the money – the almost 25pc of your pay that you lost”.
“We don’t get down to government to talk about our own pay,” she said.

“A European decision three years ago said we should have that right. The Government has failed to implement that decision so far. That causes disillusionment.”

Ms Cunningham said that her organisation has always looked for the support of the Commissioner (inset above) to highlight a lack of sufficient resources to run the organisation.

But she added that the focus was now on encouraging the new government to take action on the issue.

“I would call on government to address the issue of the restoration of garda pay and the right to negotiate,” she said. “Please, let us talk about our own pay.”

Asked if she would consider spending a few nights in prison to defend her union’s principles, Ms Cunningham said: “I can envisage myself going anywhere and having to do everything to have to represent the people that I represent.”

“I’m quite happy to do all that I have to do to be the voice of the Association of Garda Sergeants and Inspectors,” she added.

“That’s what I’ve been elected to do,” she continued.

She also said that she would always work within the framework of her union’s National Executive and membership.

“There’ll be no solo runs here,” she said.

tags: Featured Pay Restoration
previous TheJournal.ie: "Gardaí will march to the Dáil on the new government's first day"
next TheJournal.ie: Head of garda sergeants and inspectors not ruling out work stoppages