50 Years of the Garda College in Templemore

50 Years of the Garda College in Templemore

Last Friday (14th February 2014) President Tim Galvin and Alan Dowley from AGSI attended the 50th Anniversary of the opening of Garda College in Templemore. Here is a report by Alan Dowley focusing on the half decade celebrations coupled with his own memories of the Garda College. 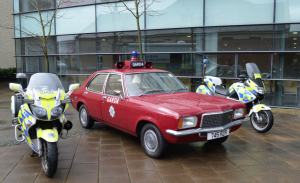 On the 14th February 1964 (St. Valentine’s Day) 190 lonely hearts passed through the entrance gates of the Garda Training Centre in Templemore, Co. Tipperary. Valentine cards were far from the minds of these recruits as they looked forward to a future career in An Garda Síochána. They had come from the Depot in Phoenix Park, now Garda Headquarters and travelled on a special train to Templemore station where they were met by local politicians. They marched from the station to the Training Centre led by the Thomas Mc Donagh Pipe Band.

An advance party of recruits and instructional staff from the Depot in the Phoenix Park went to Templemore a week ahead of the main group to assemble beds and prepare offices and classrooms.

Michael Dalton (15425C joined 27/11/63) Tullamore, Co. Offaly who was an active member of the Laois/Offaly Branch of AGSI recalled his arrival in the Garda Training Centre on the 14 of February 1964. He said the first few days were occupied with getting the place in order. Training in those days was a lot shorter than today. He remarked on the major developments that had taken place in the college. When he arrived there were three accommodation blocks that looked onto the front square, these incorporated dormitories, classrooms and administration office.

The main curriculum covered the law and physical education. Members learnt off by heart their powers of arrest under various Acts and definitions under the Road Traffic Acts. I have no doubt if asked some of the retired members who attended the reunion in the Garda College last Friday 14th February 2014 could still recite the definition of dangerous driving.

The people of Templemore were more than happy to see the Garda Training Centre open. They were very accommodating and of course they reaped the benefits of the population of Templemore being increased by some 25% overnight. The Training Centre also gave employment to the locals and some Garda recruits ended up marrying girls from the locality.

The Chief Superintendents’ inspection on a Tuesday morning was an important day in every recruit’s weekly calendar. Recruits were lined out on the front square for a detailed inspection. As the Chief inspected each member, some were ordered to take a step forward because they had not shaved that morning, their uniform was untidy, they did not have a shine on their shoes, no crease in their trousers, wrong coloured socks, they needed a haircut or the buttons on their uniform were not shiny. Discipline was rigidly enforced.

The 1970’s saw a major recruitment campaign launched to increase the force to deal with the troubles in the North. Stations along the border were increased ten-fold. Recruits were rushed through the training centre with 22 weeks training and some members received a shorter training session because they were required to deal with some serious incidents and in fact they never returned to the training centre to complete their training.

1989 was the start of a major development programme that produced new facilities and modernised the place. A new two year training programme was introduced, new members were no longer called recruits – they were now Student/Probationers and the Training Centre was renamed the Garda Síochána College.

In 1992 the National Council for Educational Awards (NECA) formally designated the Garda College as an Institution of Higher Education. In 1993 NECA approved the Student/Probationer programme for the award of a National Diploma in Police Studies.

In 2005 the Government approved an accelerated recruiting programme and intake of new Student Gardaí rose to 275 per class. Quite the opposite to what has been happening in the last few years. A new building programme was introduced to cater for the increase in numbers. New facilities included a shop, physical testing facility, library, study area, IT facilities, a coffee lounge, court room and lecture theatre. This is a long way from what was available to the Recruit Gardai in 1964. The Garda College is now on par with any third level education facility in the country – something we all can be proud of.

Policing trends have changed over the past 50 years and so it was important for An Garda Síochána to move with the times. The new Garda Trainees who will pass through the gates of the Garda College in 2014 will be introduced to a new programme known as the B.A. in Applied Policing.

The new modular programme will teach policing skills through increased use of scenario-based practical training, drawing on problem –based learning and methodologies. A far cry from 22 weeks of memorising powers of arrest and learning by heart the definition of dangerous driving or burglary.

While Degrees are important to ensure that we have a well-educated police force, practical experience, common sense and discretion go a long way in dealing with the public. I recalled a senior colleague having observed a young member dealing with a member of the public at the front desk of a station advised them that they had not dealt with that person in a very satisfactory way and that the person would be back to make a complaint. The young member responded, “I have a Diploma in Police Studies what have you got?”